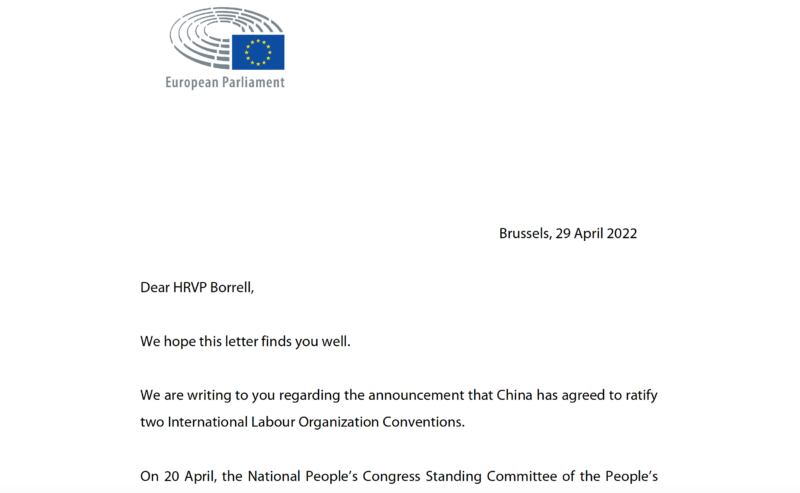 14 MEPs from 8 different countries co-signed a letter to High Representative of the Union for Foreign Affairs and Security Policy Josep Borrell regarding the announcement that China has agreed to ratify two International Labour Organization Conventions.

We hope this letter finds you well.

We are writing to you regarding the announcement that China has agreed to ratify two International Labour Organization Conventions.

On 20 April, the National People’s Congress Standing Committee of the People’s Republic of China announced its decision to ratify the Forced Labour Convention, 1930 (No. 29) and the Abolition of Forced Labour Convention, 1957 (No. 105). However, the announcement did not indicate whether ratification had already taken place. We, therefore, would like to ask you whether you could confirm if China has indeed already ratified and implemented the above-mentioned Conventions.

Given that the problem of forced labour in China is particularly widespread in the Xinjiang region, have you requested any assessment, including from your Chinese interlocutors, of what impact the ratification and implementation of Conventions No. 29 and No. 105 will have on the ground in Xinjiang? Is there any evidence that the widespread practice of forced labour, especially targeting ethnic minority groups, has changed?

In 2020, several renowned organizations specializing on labour-audits have stopped their inspecting services in Xinjiang due to difficult working conditions on the ground, making a credible vetting of supply-chains impossible. How will the EU and the EEAS monitor the situation on the ground and make sure that supplychains will be free of forced labour?

The 110th session of the ILO International Labour Conference is scheduled from 27 May to 11 June 2022. ILO Member States can call for an investigation into alleged violations of labour rights and standards and put such an investigation on the agenda of the ILO’s annual labour conference. Would you be able to publicly support such a call and fashion a coordinated action at the ILC?