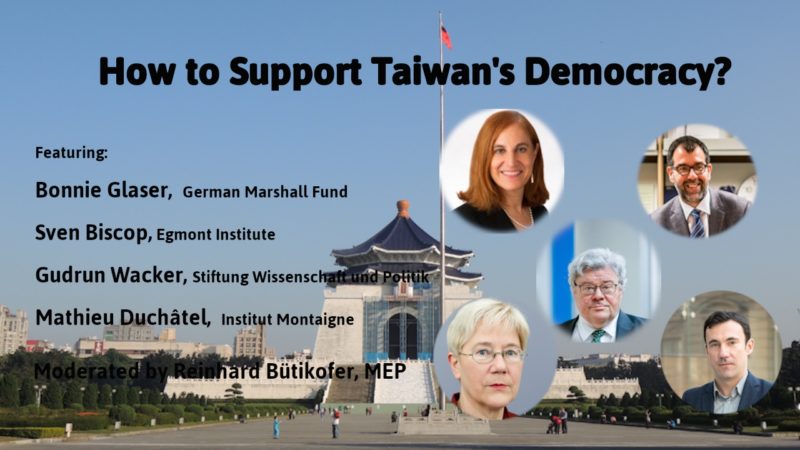 How to Support Taiwan’s Democracy?
Voices from Washington, Paris, Brussels and Berlin

Taiwan’s international position has seen remarkable and contradictory changes in 2020. Taiwan has fended off the pandemic that has otherwise brought so much devastation to so many parts of the world. This garnered positive attention for the self-ruling island as have its efforts of actively helping countries affected by the crisis. Moreover, Taiwan’s stunning success of dealing with the pandemic domestically has also challenged China’s narrative of authoritarian superiority vis-a-vis democratic systems and proved that its vibrant democracy is able to stem the challenges posed by this emergency, despite being excluded from important international health bodies.

On the other hand, Taiwan has increasingly come into the crosshairs of the PRC, its powerful neighbour, and military provocations against Taiwan have increased dramatically. International observers are concerned about increasingly loud nationalistic voices within the People’s Republic urging the Chinese Communist Party to up the ante and unify the country through military invasion.

The United States, several European Union member states  and in April 2021 also the EU as such have published Indo-Pacific strategies that signal a strong interest in deeper and multifaceted engagement with the region. Moreover, the European Parliament gave a new impetus to the EU’s flagging connectivity ambitions in the region in January 2021, which could strengthen the option of greater EU-Taiwan cooperation in the future.

Against this background, we discuss how transatlantic partners can demonstrate effective solidarity with Taiwan’s democracy with
– Bonnie Glaser, Director of the Asia Program at the German Marshall Fund of the United States in Washington D.C.
– Gudrun Wacker, Senior Research Fellow in the Asia Division at the German Institute for International and Security Affairs (Stiftung Wissenschaft und Politik, SWP) in Berlin
– Mathieu Duchâtel, Director of the Asia Program at Institut Montaigne in Paris
– Sven Biscop, Director of the Europe in the World Programme at the Egmont – Royal Institute for International Relations in Brussels