Startseite ⟩ Aktuelles ⟩ EU trade policy amid the US-China clash: Caught in the cross-fire? I breakfast discussion in Brussels on 9 July 2019 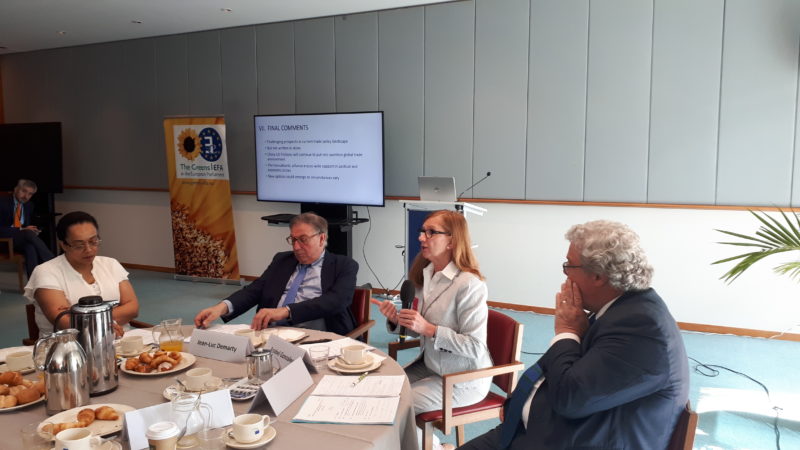 EU trade policy amid the US-China clash: caught in the cross-fire? is the research question of the study with the same title that Anabel Gonzalez and Nicolas Veron prepared for the Greens/EFA group in the European Parliament. Both are non-Resident Senior Fellows at the Peterson Institute for International Economics in Washington, D.C.

Anabel Gonzalez came to present the study in Brussels on Tuesday, 9 July, at an event that I hosted at the European Parliament. The study examines the trade war between the United States and China and the possible consequences for the EU. It takes a closer look at risks the EU is facing with regard to China’s strategic aims in trade policy and how to respond.

In addition, Jean-Luc Demarty (adviser responsible for multilateralism, WTO reform and adviser on trade negotiations with the U.S. in the Secretariat-General, European Commission) and Guntram Wolff (Directof of Bruegel) joined the debate. Among others, we discussed the questions: How should the EU deal with the US effort to isolate China? How should the EU move forward with reform of the World Trade Organisation? What can practitioners learn from this study?

You can find the final study here: EU trade policy amid the China-US clash_final version 9 July