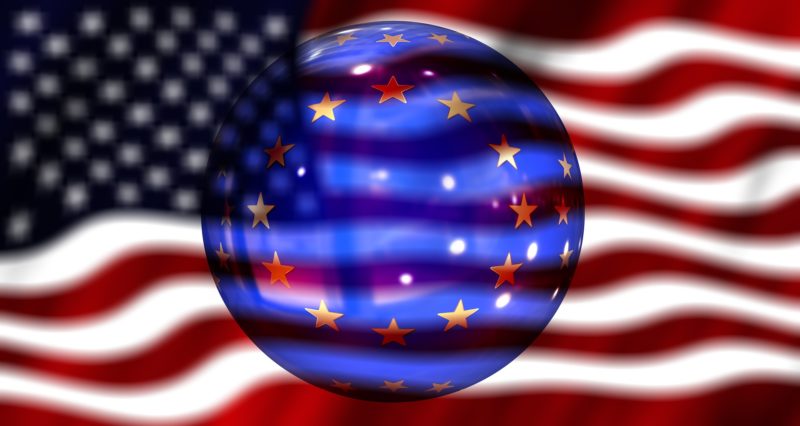 It has been a little more than a year since POTUS 45 has been elected. The transatlantic relationship has come under considerable strain over the last twelve months, and it is still hard to figure out how it can be developed constructively over the next years. It is easy to list issues on which major disagreements prevail: trade policy, NATO, the Iran deal, Middle East peace, climate policy, Asian relations…

It is also easy to point the finger at Washington D.C. from Brussels. But, as Germany’s former Federal President Heinemann used to say: when you point a finger at someone else, three fingers are pointing at yourself. And indeed, what we should look at more intensely is, how little we on the European end of the relationship have found adequate ways of dealing with the situation. Here are some examples:

French President Macron held a glamorous climate summit in Paris to celebrate the second anniversary of the global agreement to move the world towards decarbonisation by 2050. Much of the glamour was borrowed from Hollywood celebrities who joined the meet-up. Nice speeches, lofty proclamations, corporate promises to realise high ambitions, all this was there, missing was only one thing: real action. And indeed, Europe has not been able to make up its mind whether it dares to adopt the universal advice from climate scientists, NGOs and the European Parliament in favour of moving forward fast and hard or whether it will hollow out its own rhetoric by sticking to business as usual approaches when it comes to action. It is not President Trump who forces us to behave so inconsequentially.

Just recently I spoke to a conservative Polish colleague over Nord Stream 2. He knew that I had been fighting against this endeavour and he shared my criticism. But he had obviously no trust in the capability of European institutions to stop a project that would be furthering Russian geopolitical interests, undermine the goals of the Energy Union and ignore the need for European solidarity. He spoke of a conference on Nord Stream 2 to be organised in the United States. And it seems to me that he was putting some of his hope on the speculation that American sanctions might stop a project that we Europeans couldn’t muster the strength to stop ourselves. Certainly not Donald Trump’s fault.

From a European point of view, President Trump’s decision to break with 70 years of US Foreign Policy by officially recognising Jerusalem as the Israeli capital has been a major mistake. It’s certainly not going to help any peace process. First, because it doesn’t intend to. And second, because in reality there isn’t any such thing as a peace process presently. We are moving towards the perpetuation of a conflict that may not be seen as hard these days as it would have been a while ago, but that certainly would have the potential of re-igniting deep divisions in the Middle East and between the West and the Muslim world at a moment’s notice whenever the conditions are there. It is good that Europe was united in saying: no, we are not going to follow the US example. It is good that the Foreign Ministers of the EU not only talked to Israeli Prime Minister Netanyahu but also agreed to see Palestinian President Abbas when they meet next time. But Europe failed to signal even the slightest initiative to change the situation of the Israeli-Palestinian conflict for the better. Certainly everybody sees the need for that. But are we really incapable of coming up with an initiative and would it indeed be Trump’s fault if this was the case?

Listening carefully to all the equivocations emanating from the White House regarding NATO’s safety guarantees under the famous Art. 5, Europe has to understand that it must do more together for its own security. Taking advantage of the fact that in a Brexit environment the United Kingdom can no longer effectively block steps towards more European security integration as it had over the last decade at least. Commission, Parliament and Council have started moving forward. PESCO, the Permanent Structured Cooperation under the Lisbon Treaty, has been agreed. Many say there has been more movement over the past ten months than over the past ten years. Still, the steps are timid, half-baked and marred by the wrong kind of compromises. Even though we know that defence spending around Europe is de facto the most spendthrift and inefficient way of using taxpayers’ money, a majority within the European institutions wants to tackle the shortcomings of European defence policy by throwing more subsidies at the defence lobby. The results will be bureaucratic, costly and ineffective. Europe will continue to outspend the Russian Federation twofold on defence while lagging behind obvious necessities when it comes to real safety guarantees. If we would act more decisively, we could save up to a 100 bn € a year through better spending, pooling & sharing. By the way, while Europe wants to spend more on defence, we are on the other hand not cooperating enough on the diplomatic front. European foreign policy vacillates between timidity and illusionist grand-standing. For that we can’t blame the US.

On December 6 and 7, I saw Dan Hamilton again. Dan Hamilton, a Professor of Transatlantic Relations at Johns Hopkins University, is an old friend from Washington, DC. I first met him about 25 years ago. Over the years he has worked in many different capacities to strengthen transatlantic relations. He was Deputy Assistant Secretary for European Affairs in the State Department. He held a high position in the US Policy Planning and, incidentally, in 2008 he also served in the DoS Policy Planning Staff of the German Foreign Ministry. For many years he has been running an annual summer school in Minnesota, where thousands of American youth learned German and were able to get a taste of German culture. He helped introducing the German system of dual education to North Carolina. He advised Angela Merkel for a while. He has promoted many projects, for instance a comparison of how different high-tech regions in the US, Germany and Japan deal with globalisation. Each year he publishes a seminal book on the state of the transatlantic economy together with Joe Quinlan, in which the importance of investment and trade between the regions is broken down to individual US state level. And he has been a big supporter of TTIP. Transatlanticists like him are rare, and I don’t believe there is a single such person inside the Trump administration.
Dan Hamilton was in Brussels and also in Berlin to talk about the future of economic relations between Europe and the United States. Listening to him reminded me of the need to reflect anew on some old issues.
Hamilton does not believe we can return to TTIP. He has come to the conclusion that insisting on privileged protection of foreign investors under the ISDS scheme in a transatlantic trade treaty would be a deal breaker. He says that regulatory cooperation needs to improve standards rather than weaken them. Sometimes I was tempted to say, ‘I told you so.’ But beyond these contemplations on what went wrong, he formulated fundamental questions that currently receive little attention.
Is there a basis for taking new initiatives after the de facto failure of TTIP in transatlantic economic relations? Should we not fear that, without such initiatives, the current gridlock in the face of the Trump policy on the one hand and protectionist sentiments in Europe on the other will be replaced by an accelerating and deepening of the divide? Have the geostrategic arguments that it is better to be a rule-maker than rule-taker faded away? If one wanted to consider new initiatives, would there be any chance of possibly bypassing Trump’s administration through a stronger cooperation with US states?
While I do not see particularly convincing answers to these questions, it should be worrying that only an optimist of transatlantic relations like Dan Hamilton formulates them. It seems like the rejection and dislike of Trump seduce us into laziness in our own thinking. Even though, given the global situation, we cannot afford that.
There are signals from Washington and Buenos Aires that Trump’s administration might move hard against the WTO next. Will Europe have a strategy to counter that apart from pursuing as many free trade agreements as possible?

Step up to the plate

Yes, indeed Trump’s tenure creates and escalates many difficulties in the transatlantic relationship. But Europe must stop revelling in the cheap excuse of victimisation and self-victimisation. Instead, we must, as they say in baseball, step up to the plate. Yogi Berra, who knew everything about baseball, would have told us: You are at a fork in the road, take it.